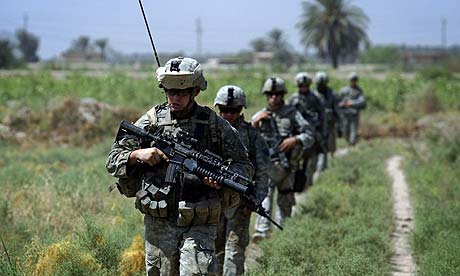 Thinking back about a discussion in class about the modern age and warfare. We read an article on Stuxnet which showed us that there was a cyberattack on Iran by the US government. Also, reading back on different WikiLeaks articles it made me think more about if countries go into war with each other, what will the war look like, is it old fashioned fought by the military or is it maybe more fought online?

The Stuxnet article showed that nowadays people can actually get into machine systems by the internet. Both have different coding, however people found a way to get into the system by a virus which used a zero-day exploit to spread. So, if it is possible to manipulate a working machine, in this case centrifuges that were enriching uranium, do we still need physical troops to go to the country? In the case of Stuxnet they did have an insider in Iran which delivered the virus via USB. Then still it would be possible to just send one guy undercover instead of troops.

Even if it might be possible that wars will be fought via the Net, there is still the terorrism threat. The Internet is nowadays also often used by extremist groups who starts forums in which they can express their opinions and hope to find other extremists. One of these forums, the Shumukh forum, which is one of the major jihadist forums, say that there is a conspiracy to destroy Syria. The countries involved in this will be the US, Iran and Israel. It predicts that everyone will be exhausted, all weapons will be destroyed and  civilization will go back to the time of Stone Age. If this is true, it means that instead of a cyber war the alliance of US, Iran and Israel will actually have an intervention to destroy Assad’s regime.

Interesting to see is that the Stuxnet mission was from the US government who tried to stop Iran’s nuclear plant, and this mission was actually intervened by different antivirus experts who worked together to actually stop the virus and thereby going against the US government. Thus on a cyberlevel, different countries can work together easily by getting experts to work out of their home, which also shows that boundaries actually vanish in this cyberworld. Now it was against one government, but what if on both side multiple countries join..

The article about the intervention in Syria, shows that even though there is the use of the internet by these different extremist groups, countries still think about getting their physical troops involved. I would think that maybe in the modern age the internet or just computers in general will be a way in which countries will be able to intervene in their local politics. Looking back at WikiLeaks, government secrets leaked so other countries knew about their plans, their secrets and other issues that were going on. If every country knows about the government plans and ideas of other countries it seems like there will be a world in which everybody knows what will happen.

Will this increase a threat of global warfare, or will it remove any threats. Governments know then that whatever they plan, will be out in the open..