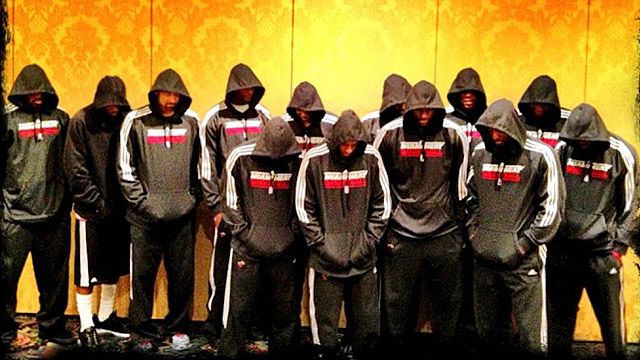 One of the biggest news stories that has been circulating for the past month is the story of Trayvon Martin, a story that gained momentum around a month after it actually happened. Now its front page news in every newspaper and website. President Obama spoke of the case saying that Trayvon reminded him of his children, that if he “had a son, he’d look like Trayvon.” Representative Rush was removed from the floor of the House of Representatives for wearing a hoodie while speaking on the subject of Trayvon. The implications of a young unarmed black youth being killed by a neighborhood watchman George Zimmerman have made Americans everywhere rethink their feelings on racial prejudice and assumption. One of the most interesting articles that’s been posted on this subject focuses on the act by the Miami Heat where they all posed in hoodies, to create an image (above) which the article describes the effect it has upon a viewer: “…a devastating image. Thirteen men with brown skin and black outerwear, not looking at you. Your pulse quickens when you see it. Your heart stops. Your skin pimples — at the mournful sense of peace and containment of agitation. Your brain twists.” This description reveals just what we automatically associate this garment with: a type of street cred and a distinct identity. The article discusses how the appearance of someone dressed in a hoodie likens back to the 1950s when white kids were wearing leather jackets to emulate the rebellious Dean, Brando, Elvis and the Fonz. This entire discussion of appearance and in this case prejudice made me think of how we construct our internet identities. Are interactions hurt or helped by their sometime anonymous nature? This concept is reminiscent of 4Chan’s Christopher Poole vs. Mark Zukerburg on anonymity on the internet. Is prejudice avoided by this anonymous nature? I found this case to be so interesting because of our constant discussions on how digital identities are created, mostly through choices that we make. Our digital identities seems to more complex that the things people assume about me if I wore a leather jacket to class versus a suit. Just as we spoke about how digital identities are constructed, perhaps the true appearance of certain identities are different in reality than how we construct them, such as George Zimmerman as the vigilante. That article discusses how Zimmerman’s case is similar to Bernhard Goetz, a vigilante in New York in 1984 who shot and killed four black teenagers he said were trying to mug him. Indeed, Zimmerman may have to thank Goetz’s caser (which was heavily involved in by the NRA) for his right to carry the very firearm he used to kill Martin. The article most poignantly says: “…we celebrate the vigilante on our screens, we tell ourselves it’s because of our healthy mistrust of corrupt structures, or because we’re genuinely vulnerable — not because of our more shameful tendency to sterotype others based on fear or hatred.” This news story seems to encompass many of the different concepts that are at the forefront of the creation of the digital age and in the theoretical base that we’ve used for this class.

I think its interesting to look at online identity in terms of the Treyvon Martin case. Zimmerman acted on his prejudices in the real world and now we are seeing how the consequences of those actions play out in the court system. He is being punished (or potentially going to be punished) because his identity is known. On the other hand, anonymous internet users commit acts of racism everyday but are never held accountable. Granted they’re not killing anyone, but if you go on a website like 4chan, tons of racist comments are posted all the time and there’s never any consequence. I know these comments are protected by the first amendment but it some cases it feels like users are hiding behind their anonymity in order to give them free license to say whatever they want.

Which goes back to our discussions on anonymity and identity. A few of us felt that it was ok to be anonymous explain what you believe from a safe distance and others of us felt that your words express what you believe and if you won’t stand behind that then you shouldn’t be speaking. It would be really interesting to take a poll from 4chan asking why they choose to be anonymous.