I guess I’ll be one of the brave souls to mention trolling in a post because recent class discussions have caused me to consider the impact of technology on our culture (our Digital America, if you will). Throughout the semester, I have read articles that argue that social media sites have changed our culture for the worse; we choose to interact with people through computer screens instead of in person, we are distancing ourselves from “real” human interaction, we are forgetting how to socialize, etc. These articles make a compelling and significant point in that nothing can replace the interactions we have in person that make us humans, and the new digital culture we live in is moving us away from this. One counter point to this argument is that social media sites are new tools that actually improve our connections with people, both from close up as well as from far away. Using a site like Facebook or Twitter allows people to share more of their lives with both those directly around them as well as those possibly oceans away. It is the times when people sit next to each other and are constantly on their smartphones, however, that causes this question of whether or not social media is making or breaking our new cultural age of communication.

I recently read an opinion in mashable.com written by Josh Rose. Rose attempts to argue that social media has a positive impact on our culture by describing the way in which he interacts with his son, whom he only gets to see occasionally because he and his wife are divorced. Rose says that the “I don’t care what you had for breakfast this morning” argument against social media may apply to some people, but in his case, he dies for the moments where his son tells him exactly that. Rose notes how confusing social media can be for those who engage with it: “Social media simultaneously draws us nearer and distances us.” People feel both pulled closer to the people far away from them but sometimes distanced from those in their physical proximity. Rose makes an observation from the coffee shop he is writing in: four people are reading newspapers while four people are on their laptops. He observes the “juxtapositions of physical and digital going on,” and observes that “people aren’t giving up long-form reading, considered thinking or social interactions. They are just filling all the space between.” This is an interesting idea, “filling the space between.” People who interact with social media aren’t moving away from their cultural surroundings, they are merely filling the gap between interactions. After all, as Rose puts it, “the Internet doesn’t steal our humanity, it reflects it. The Internet doesn’t get inside us, it shows what’s inside us.” Social media gives us a medium through which to share our thoughts, feelings, goings-on, etc. instead of replacing them in some way with something less real. The internet is the medium which the message is conveyed, it is not becoming the message itself.

After reading Rose’s piece, I began to think about how this positive impact on our lives he cites contrasts with the impact trolling has been cited to have. For those who are unclear on what exactly “trolling” is, knowyourmeme.com gives a comprehensive definition of trolling to make it more clear. The New York Times simply defines it as “manipulating other people’s emotional equilibrium.” There have been many stories about how trolling has caused not just emotional distress, but emotional destruction to its victims. One man in the UK was arrested for “trolling” about a girl after she committed suicide because she was bullied. (Read the article here). This is only one example of a story like this, but there are many others out there. I then came across an article called Top 10 Trolls in Internet History, which details 10 results of “trolling” that, while causing annoyance and frustration, do not go as far as to insult a child who has ended their life. Either way, trolling seems to have only negative consequences for its victims; a point that makes sense because its intention is “emotional distress.” Further down in the knowyourmeme.com article on trolling, the “Rules of the Internet” on trolling, beginning with the statement “We are anonymous” and continuing down to “Nothing is sacred” and “The more beautiful and pure a thing is- the more satisfying it is to corrupt it.” What, now? Nothing is sacred? The more beautiful and pure something is… the more fun it is to ruin it? These ideas play into the theory of psychology that we all have a little evil in us, and under the right circumstances it can come out. It is what was seen in Philip Zimbardo’s 1971 prison experiment at Stanford University in which participants were randomly assigned to part of “prisoner” or “guard” and the guards became sadistic, causing so much emotional distress to the prisoners that the experiment had to be shut down early. The “Rules of the Internet” begin with the statement “We are anonymous,” significant because psychological distress of those who troll seems to be the gasoline on the pile of wood while anonymity is the match. What causes people to want to cause harm to loved ones of those who have died? In the New York Times article “The Trolls Among Us”, Jason Fortuny says that trolling will only stop when people stop taking it seriously. This may be true, but this type of bullying would not and is not tolerated in person; there is a word for it, and it is harassment. Anonymity makes people more likely to troll and too resource-consuming for authorities to track. 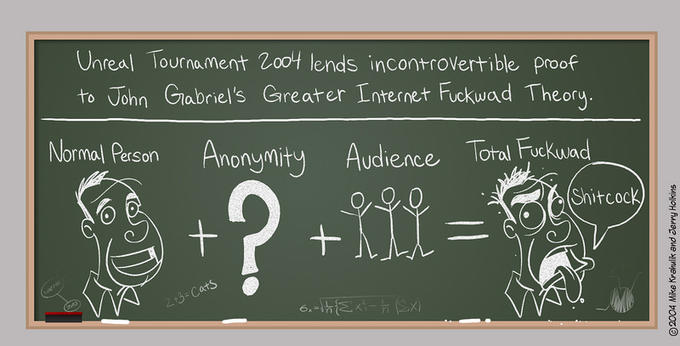 Taking both of these perspectives into mind, do you think the internet has created possibilities for more positive or negative impacts on our culture? How do you personally think our culture has been impacted by this digital age?

I think the old argument “everything in moderation” can be applied to our digital culture quite appropriately. I appreciate facebook and skype very much because I can keep up with my friends and family at home. However, rather than keep up with people on campus via facebook I can talk to them in person which is definitely my preference. But hours upon hours on 4chan or myspace or twitter or World of Warcraft sounds like a grand waste of time. I’m a big fan of the outdoors and I just feel like there is so much more to explore out there than on a computer screen. And, that those experiences when shared with people in person resonate with us so much more then even the best conversations or blogs on the internet.

I think that the internet has caused us to have multiple identities if anything. We have our online persona and our real-world persona. I believe that the negative things we do online are not necessarily representative of things that we would be willing to do in the real-world. The anonymity gives us the willingness to do harmful things to others online; things we would never do in person. In this sense I believe that some of these possibilities are negative. With all things though there will be good and bad, so we need to recognize the bad and try to combat it so that we can reap the benefits from the good. If we are aware that people behave differently online than they do in person we should view online personas in a different light.